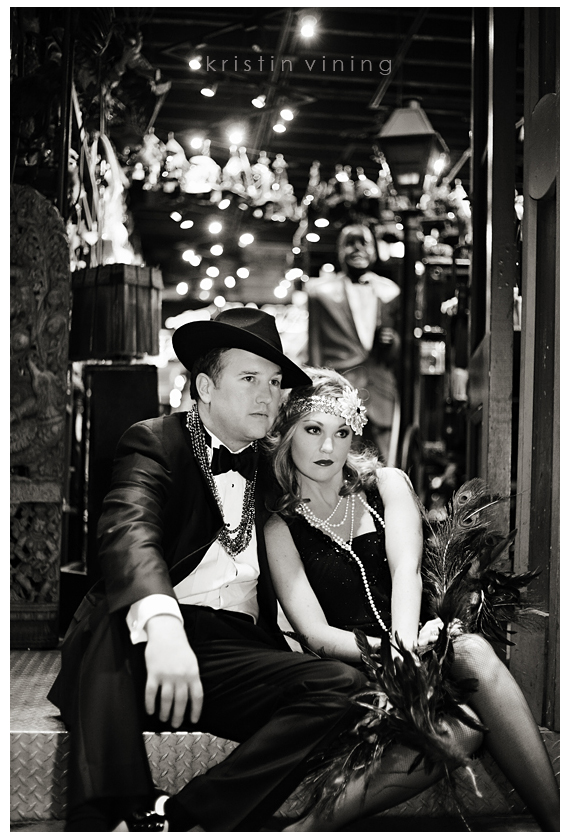 “Howdy, Ya’ll! (insert a little cajun-drawl!)”  Earlier this month, I hopped on a plane and headed down to NOLA to photograph last year’s Facebook Frenzy contest winner, Andrea Eaton (those images are coming soon!) and this delicious Texas couple!  Dustee and I met via Style Me Pretty, after seeing the beautiful Lindsey + John’s blog post.  She called.  We clicked.  She booked.  Having never met in person, she and her family took that leap of faith in us – in me!  And I could not be happier!!  And wouldn’t you know it – Dustee and Justin are being featured this morning on Style Me Pretty’s, Little Black Book!!  Those who come from SMP, shall return to SMP??  THANK YOU, Ms. Eddye – you and the entire SMP team are AMAZING!!

Back to the eSession, we started out shooting at the quaint  W Hotel, followed by a visit to Mardi Gras World!!  We ended the night on Bourbon Street with a little stop at the jazz cafe inside the Royal Sonesta Hotel.  THANK YOU to EVERYONE involved in making this shoot possible (Tommy, Duanne and Andi with Paris Parker Salon…THANK YOU!!).  While New Orleans was setting record-breaking frigid temperatures, Dustee and Justin kept it hot and spicy!!  We pulled together as a team, got in – took our shot – and got out!  I am so proud of what we were able to accomplish in little time and freezing (to the bone cold) weather!!

And because I’m utterly in love with this duo, I figured I would just share their entire love story – it’s just too good to pass up (and I certainly cannot top this writing!).

“A native of a small West Texas town known for its fried steak fingers and football, Dustee Tucker (yes, her given name!) considers herself a “home grown” girl.  But don’t let the accent fool you, she isn’t all small town.   Coming from a family that encourages you to reach for your dreams, Dustee grew up surrounded by inspiration from her family — Texas Senator Lloyd Bentsen and Interior Secretary Gale Norton.  Dustee saw their many contributions as a testament of the value of hard work and determination and sought an opportunity to work in the marbled halls of Capitol Hill as a press staffer for Senator Kay Bailey Hutchison.  In her experience on “the Hill” she witnessed the crippling of ricin poisoning on the Capitol offices, the fall of the space shuttle Columbia over Texas and the collapse of Enron; but most importantly, she saw the rise of American’s pride in our country after 9/11.  Dustee later went on to work for President George W. Bush as a political appointee where she served as a Director of Communications to Alphonso Jackson.  From a family that represents both sides of the political aisle, Dustee jokes that of all the advice she was given, probably the truest statement in Washington is, “If you want a friend, get a dog.”  She took that advice to heart, and is the proud co-owner of a yellow lab named Raleigh.  After seven years of the political hustle and bustle, Dustee traded in DC for a chance to get back to family and friends and all things Texas.  In her current role, Dustee advises executives and leading companies around the world on media strategy and communications.

Also a native of Texas, Justin grew up in Austin and was headed to the University of Texas when he changed his plans and continued his baseball dreams at St. Mary’s University in San Antonio on a baseball scholarship.  Fate works in mysterious ways as his college teammate and close friend’s wife later introduced him to that certain girl from West Texas.  During his junior year, St. Mary’s won the 2001 Division II National Championship in Montgomery, Alabama, and despite his love of St. Mary’s blue and gold, Justin continues to bleed the burnt orange of his beloved Texas Longhorns.  He introduced Dustee to all things Bevo, and even though she still wears high heels to the games, she now has burnt orange in her wardrobe.

Justin and Dustee still joke about their first meeting.  Justin misheard Dustee when she pronounced her name, mistaking “Dustee” for “Destiny.”  Well, little did they know that a year later, destiny would indeed be the case!”

Justin and Dustee are tying the knot at the swanky One&Only Ocean Club in the Bahamas this summer.  We CANNOT WAIT!!  OH – and J+D…THANK YOU for the yummy after-shoot dinner.  I had THE BEST time hanging out with y’all.  Lots of love!! 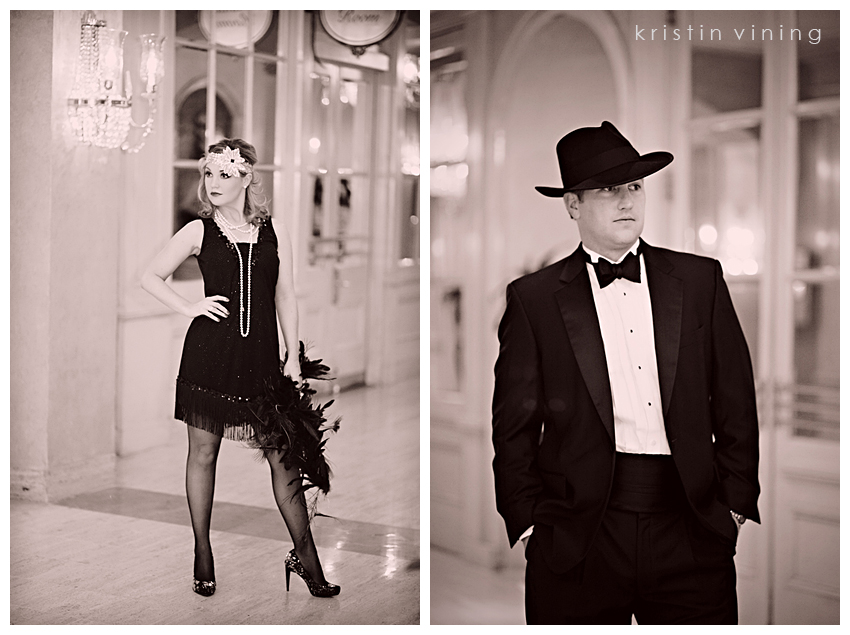 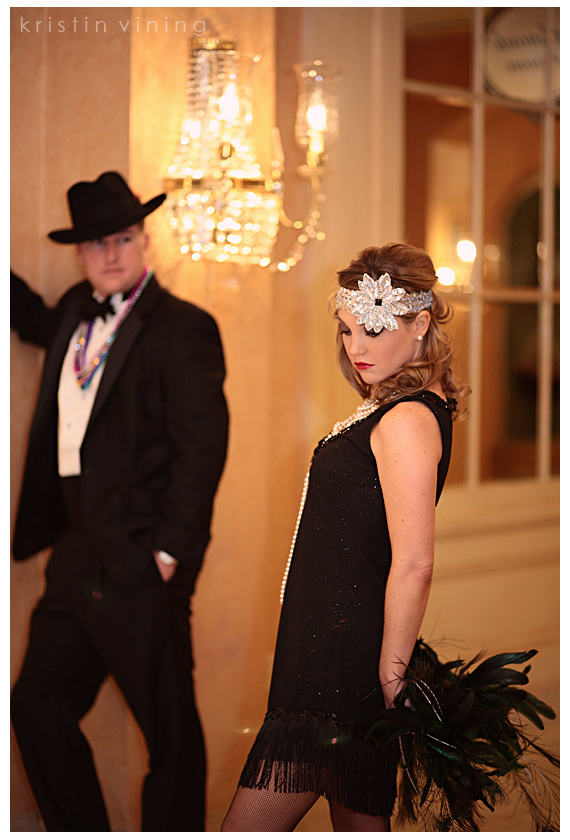 tara mauldin - FANTASTIC job kristin! i see you pushing the envelope more and more, and i LOVE it! kudos to you my friend…love love…taraJanuary 27, 2010 – 5:49 pm

Mardi Gras + Roaring Twenties = Fantasticly Fun NOLA E*Shoot | Style Me Pretty : The Ultimate Wedding Blog - […] Dustee told us that she and Justin had decided on a destination wedding ~ but were torn between New Orleans and the Carribean. Once they finally settled on the Bahamas, they jumped at the chance to meet Kristin in New Orleans for their e*shoot. […]January 27, 2010 – 9:12 pm

Bette Tucker - Kristin, as the mother of the future bride,these photos are breathtaking! Your ability to capture and combine makes for pictures that pop off the page. Unique, brilliant and unforgettable. You have such talent! Can’t wait until the wedding.January 27, 2010 – 10:23 pm

Mardi Gras + Roaring Twenties = Fantasticly Fun NOLA E*Shoot « Best Dream Day - […] Dustee told us that she and Justin had decided on a destination wedding ~ but were torn between New Orleans and the Carribean. Once they finally settled on the Bahamas, they jumped at the chance to meet Kristin in New Orleans for their e*shoot. […]January 28, 2010 – 2:11 am

Kristen - How fun are these!? Gorgeous couple and awesome job Kristin!!

Bahama wedding inspiration…reality coming in June! » Charlotte Wedding Planner - […] June 26th will be here before we know it, at which point we will share the reality through the eyes of Kristin Vining Photography.  Oh…and be sure to check out Dustee + Justin’s recent New Orleans engagement session! […]March 8, 2010 – 7:14 pm

Dustee + Justin Wedding | Paradise Island, Bahamas » Charlotte Wedding Photographer - […] sure to visit their New Orleans engagement session that we shot back in January of this […]July 13, 2010 – 7:18 pm

Megan Wheeler - Participant….LAST ENTRY! Royal Sonesta Hotel. Don’t you think this contest kind of didn’t work out as planned. I mean it is obvious that some of these teams don’t have these people submitting these answers. For example “Royal Sonesta Hotel-team jessica and scott” Dont you find it odd that 13+ people happened to log in back to back and type out the exact same answer…the EXACT same way?? Or “Team Courtney and Abel – Royal Sonesta Hotel”…again 12+ people put the exact same thing?? I mean it is obvious they are just changing the names and maybe the emails and resubmitting.I just don’t really think it is a fair competition for someone who is playing it fair and would love to have the opportunity to work w/ you and LRT.December 5, 2010 – 8:12 pm

Megan I understand your concern… and so you know we are in no way cheating… I have been imploring all our friends, family and co-workers to post by phone calls, emails and facebooks posts. We have been submitting to our friends were to find the link and what to type in the post… ie ” Team Courtney and Abel- ROYAL SONESTA HOTEL” .. so yes they are copy and pasting what I am asking them everyday to log in an post. As for being back to back… thats because my hubby at work will stand over his coworkers and bring them to his computer to post one after another.
I am sorry this has seemed to ruin the contest for you, but we are just as excited to work with these two amazingly talented individuals, and wish you wouldnt give up… there are still many more days left in the contest

Jessica Reinsch - Megan,
I’m sorry you feel that way and I see your point. I can speak as far as my votes, but not the votes of others. Each day of the contest, I send an email out to all my friends, an email to my fiance to send to all his friends at work, make a post on my facebook page, ask family when they come to visit- sit with them until they vote,and even recruit friends at school with me to vote (sometimes as we are sitting in lecture bored to death). I have not posted email addresses myself for other and don’t intend on doing so. Now with that being said I have no control of others, nor do I want to be included in being judged as being unfair. If there is a way to ensure fairness in the future I would encourage it.
Sincerely, JessicaDecember 5, 2010 – 8:43 pm

Jessica Reinsch - And as Courtney stated, we are all excited to work with these two amazing ladies! Don’t give up!

kristinvining - Good morning, Megan!! Thank you so much for your concerns…I really appreciate the feedback. As well, thank you Jessica and Courtney for your honesty and words. Megan, first, please know that whatever comments are left on behalf of Team Courtney and Jessica have no bearing on you, as they are past clients. I do not believe you and I have had the pleasure of working together, so your comments are in fact considered part of the second giveaway.

I do hope that you will still continue participate.

Secondly, I can see which ip address each and every comment comes from. In fairness, I do think that for the sake of ‘what others are doing’ (Jess and Court…please know that I trust and believe in you), I am going to limit (beginning today) the number of comments from each to no more than two (husband/wife/etc) per day from the same ip address. That way I know across the board it is being played fair. Make sense guys? I will go and include this back in the ‘How to Play!’
Please let me know if you have any questions. Thanks so much!! xoxoDecember 6, 2010 – 6:29 am

Jessica Reinsch - I think this is a great idea. This way we can ensure that it is fair for everyone and I will include that in reminders to friends when voting as well! Let the games continue!December 6, 2010 – 6:58 am