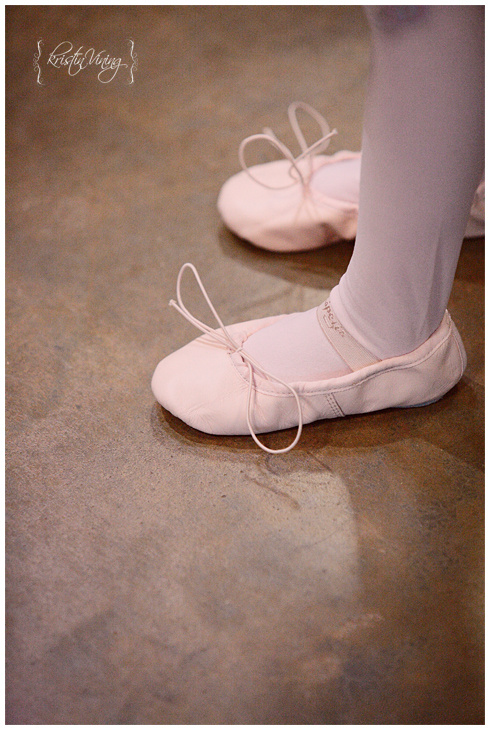 “There they are!  Her FIRST pair of Capezio’s.  Her FIRST leotard.  She was beside herself excited about her FIRST ballet class!”

Yesterday was an incredibly exciting day in our home – well, studio I should say.  I had just completed editing our bridal session from that morning when I decided, “I’m doing it.  I’m enrolling Addy in ballet right now!”  So a surfin’ I went.  The NC School of Dance looked great, but it is geared more towards Creative Movement for 3 1/2 year old’s.  Unfortunately, The Charlotte School of Ballet’s schedule doesn’t align with ours, so I hopped on over to the YMCA’s website.  WOW!  They offer a TON of children programs (okay, so I should know these mommy things right?  I mean come on…we’ve been members on and off for years).  So after downloading the class schedule (and getting some great feedback from my phenom, Studio Manager Lizzy-lou…who took her first ballet class there only a few years ago as a little girl….bahahaha…I’m kidding!) I made one phone call and we were all set.  First class was at 6pm…that night!

Morris Costumes and Dancewear was fantastic.  They had a variety of options within what Addy was required to wear – pink leotard, pink tights, pink leather shoes, pink skirt and black patent leather taps shoes (eeekk…next week we TAP!).  We played around the store trying on all sorts of different things before we ultimately decided to keep it angelic and dainty.  Meanwhile, Bray found humor and joy in being the epitome of the classic three year old boy.  He was in and out of the racks.  He took his shoes off at one point to try on Addy’s ballet shoes.  He did a little shopping of his own (see last picture of what he decided to buy).  On several occasions, he attempted to head in to the Employee’s Only departments.  And to top it all off…he decided it would be fun to poop in his Thomas the Train underwear.  Boys!

Okay, so back to the ballet.  We arrived at the Harris Y around 5pm to get all of the registration paperwork out of the way then headed over to the Activity Center.  Quite impressive I must say.  We were greeted by an incredibly warm and friendly staff.  Addy was first measured for her dance recital costume…and this is where I had to pull it together.  THANK THE LORD that my husband walked up just as I was about to loose it.  Whew…I swallowed that lump hard.  Next, we allowed both Bray and Addy to run around the center playing video games and air hockey…they were in hog heaven!

Not long after, Studio C opened it’s doors and welcomed in all of the anxiously awaiting ballerina princesses.  Aaaaaaaaannnd…here we go, “Get it together, Kristin…you can’t loose it here.”  We walked in and Addy wouldn’t let go of my leg.  She was nervous.  Apprehensive.  Uncertain.  Then walks up, Miss Amanda.  AWESOME!!!  She talked about how they were going to dance like Tinkerbell’s and that she had lots of stickers to give her.  She gracefully walked my baby girl to a green circle on the floor and comforted her in her lap.  It was then time for me to go (thankfully dry-eyed)!

I remember when I was a little girl dancing my mom and dad would watch me through a glass window.  Unfortunately, that was not the case with this particular studio.  I had to watch from a TV in the lobby.  Of course I was a bit disappointed, but that is okay.  I still found a tremendous amount of joy watching her flutter her legs like a butterfly.  She walked on her tippy-toes with her precious little arms extended above.  She learned to point and plie from the bar.  It was a perfectly bliss moment in my life.  A moment that will forever be embedded in my mind.  She danced.  I watched.  Bray and Daddy played.  I privately rejoiced to the Lord!

Last night she slept with her ballet shoes…I think she liked it!

(side note:  Miss Amanda invited me to come into the class next week so that I could get some in-class pictures!!  YAY!!  But for now…these are the little raw moments captured before and right after class last night). 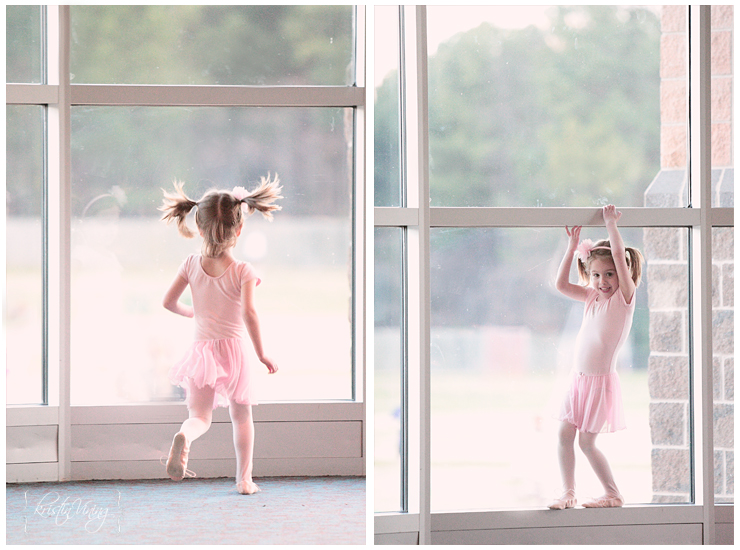 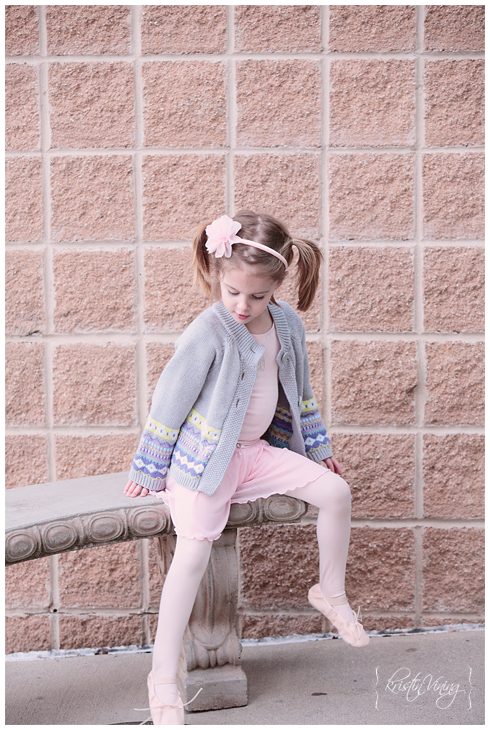 Melissa Smith - ooo talk about pulling on the heart strings. I still have the photographs from my little girs (not so little anymore) first ballet shoes I even still have the shoes. Its moments like this that I thank god for the tools we have to capture these moments and save them for on days like this when I remember how it felt seeing my little girl in her first pair of ballet shoes. Ahh thanks for the reminder. This is something you will treasure forever especially when you one day look at her and whats looking back isn’t a little girl anymore. xoxo MelissaFebruary 24, 2011 – 12:45 pm

Bergen - Adorable!! You are so blessed

Nana - Seeing those pixs of my grandbaby, Addy, brings tears to my eyes, Kristy. You were only 3 years old when I started you in ballet. You also did tap too. Time really flys by.. Enjoy these years with your babies.. the years go by so fast.. Love, MomFebruary 24, 2011 – 3:31 pm

kristinvining - Awwww…thanks, Mom. I love you. Melissa – you are so welcome. I love reminders…and feel so entirely blessed to be able to document each and every memory. My fingers are crossed that her recital is the MORNING of June 4th – wedding day for me. Or – I’ll take the 5th.